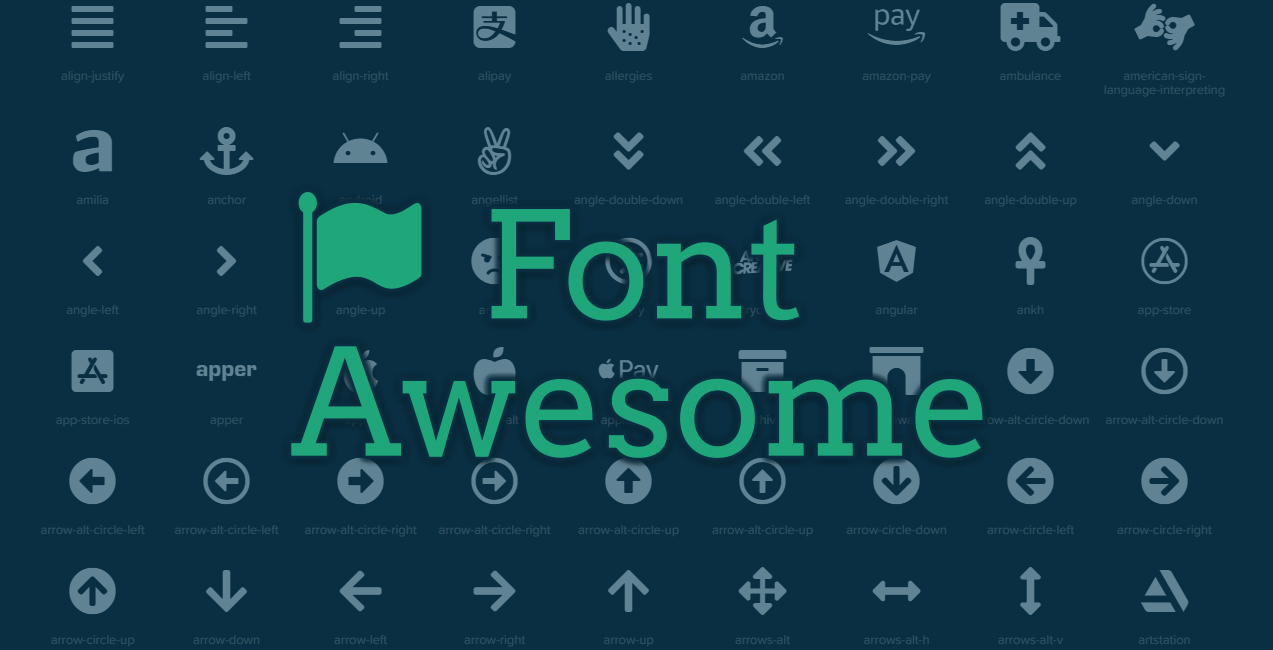 Behold the Power of Font Awesome!

Font Awesome is a free font icon library consisting of more than 600 icons that relies on CSS rather than static images to generate over 600 icons to enhance a website. Font Awesome has a 38% market share for sites that use third-party fonts, ranking second to Google Fonts.

A lot of things have changed in creating websites, but one of the things that has stayed the same is generating images. When generating an image for a site, you would see something like this:

This method serves up a static image on the site and it would be up to the developer or a designer to generate and export that icon via Adobe Photoshop as well as making sure the image dimensions are the correct size in relation to the content. There is absolutely nothing wrong with this method and we still use this approach on sites, but when it comes to icons, there are better options that we’ll discuss later.

Another approach would be utilizing a background image. This method still involves generating a static image, but instead of referencing it with an <img> attribute, you would generate it as a CSS background image to a specific element:

Additionally, you would need to create the CSS to generate that image to the element

Again, this allows for the icon to be generated via CSS, however you would still need to create that icon and make graphical changes to the graphic via Adobe Photoshop . Additionally, if you wanted to add a hover effect for that icon, you would need to either generate a completely different image or use an image sprite.

The Advantages of Font Awesome Icons

With Font Awesome, you have a library to pick and choose pre-rendered icons from. The icons have a similar look and feel to them, making graphical continuity easy. This greatly reduces time in having to create icons by a designer as well as managing several image assets.

Additionally, if you decide to change a site’s color scheme, you can target CSS to make a global change rather than having to recreate each and every instance of an icon.

A huge advantage to Font Awesome is, well, it is a font. So, you can use CSS attributes to change its color, add shadows, or change the size for different responsive viewports. You can also easily change the CSS for hover states without having to import another file, as it’s just matter of adding the :hover selector. Additionally, it will always look as crisp as can be since it is a vectored font and no matter the size, it will remain sharp and clear.

Who doesn’t like a fast website? Since all the icons are being generated via one local file, there will only be one HTTP request as opposed to loading several images to cater to your icon needs.

Getting Font Awesome set up on your website is as easy going to their website and including their CSS to your project and you’re ready to go!

From there, you can go ahead and reference the library and copy and paste the code anywhere on your site like this:

You can also add inline styles or your own class to customize your icon:

Finally, you can use Font Awesome icons as pseudo elements to other elements!

If you want to get fancy, you can even add hover states to icons

Using Font Awesome for generic icons is a great way to add a consistent look and feel to your site as well as providing a great deal of performance and scalability. You can find out more by visiting FontAwesome.com or reaching out to your Vanguard Client Manager.

This web site is not endorsed by, directly affiliated with, maintained, authorized, or sponsored by fontawesome.com