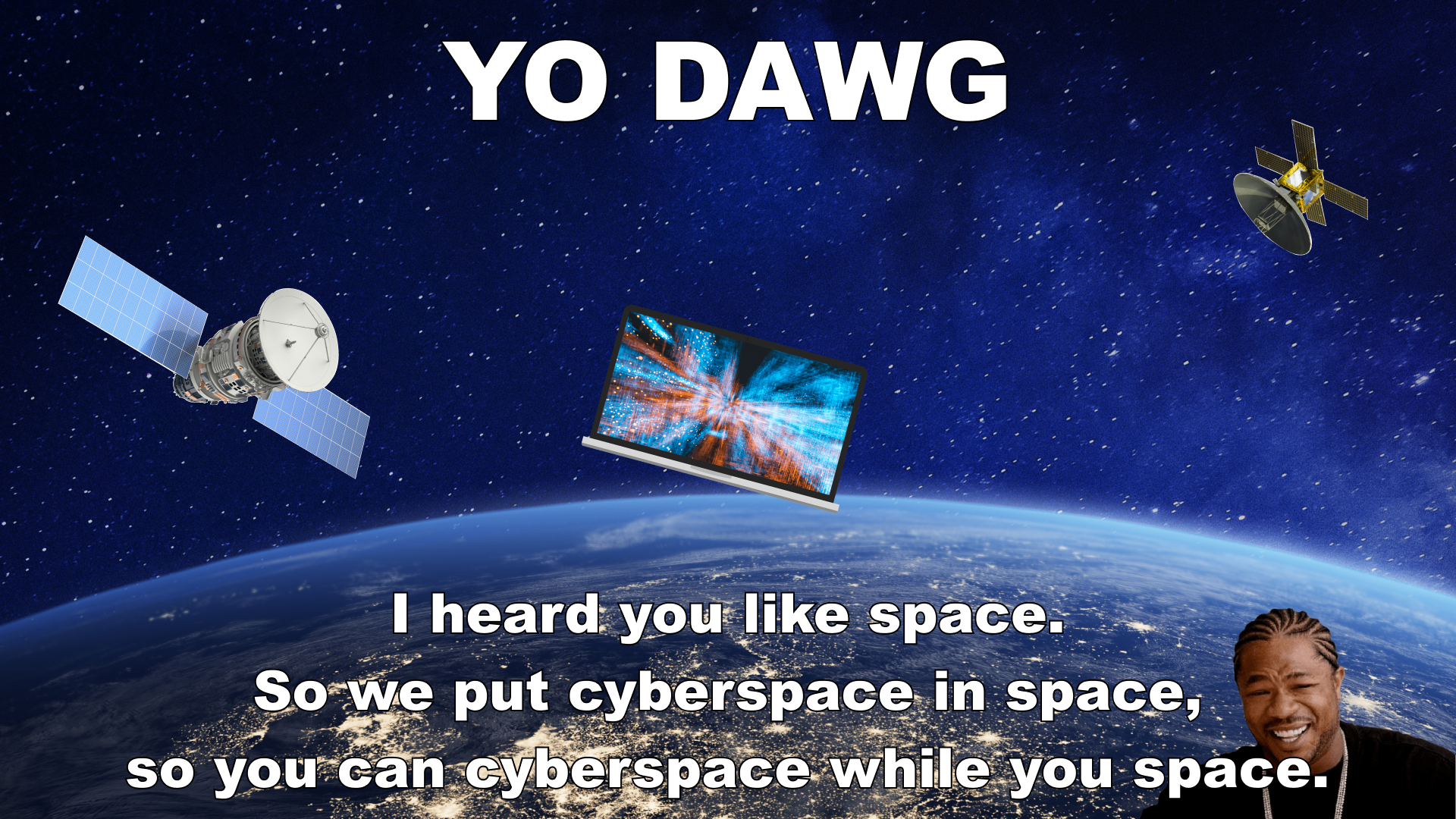 A new era of connectivity is dawning on humanity. The mainstream internet is making its way into space with many private companies and governments leading the charge for high-speed, low latency, internet everywhere. Not only will this connect more people with faster and more affordable information than ever before, but it might also just make the world seem a little smaller.

A Brief History of The Internet in Space

Internet access via satellites in space is not a new phenomenon. For almost as long as the internet has existed, it has been communicated through space. This is because large communications networks were already established before the proliferation of the early internet. Some of us old folks (Millennials) still remember the days of dial-up and listening to the sweet, sweet sounds of our modem connecting to the web through our telephone landline. At this time, phone, television, and other communication were already being relayed through satellites beginning with first dedicated communication satellite, Telstar 1, launched in July of 1962.

It is also worth mentioning that NASA has its own communications network (called “Space Network”). This network uses various ground stations and a fleet of TDRS (Tracking and Data Relay Satellites) which first launched on April 4, 1983. Over time this network has been upgraded with three different generations of satellites. Eventually, this network was connected to the world wide web, allowing for the first ever Tweet to be sent from space on May 13, 2009.

Next, came commercial satellite phone and data communication starting in the late 1990’s. Companies like Iridium, Globalstar, Hughes, and Thuraya began launching and offering limited or global communication. Globalstar’s constellation of satellites required direct contact with ground stations in order to connect calls. This configuration is termed “bent pipe” as the call originates from the handset or ground station. It is relayed through only one satellite and back down to the handset or ground station, forming the shape of a bent pipe. Iridium’s constellation of satellites was able to communicate to each other directly as well as ground stations forming a mesh network. Therefore, fewer ground stations were needed and calls within the Iridium network never had to be routed through a ground station. While Iridium’s network was more robust, it could only offer 2.4kbps (Kilobits per second) of data versus Globalstar’s 52kbps (voice communication had higher bandwidth).

While this service was now available to consumers and businesses, the economics of this service didn’t make sense to most. With a handset at the time costing up to $1,300 and service at $7/minute, the demand was small and the costs of building, launching, and maintaining satellites were huge. This caused many mergers and bankruptcies to occur during this time. However, demand slowly increased through the 2000’s as the world became more and more connected. That connection was now seen as a necessity. This is especially true for transportation such as airliners and cargo ships.

This is about the time when many private rocket companies, such as Sea Launch (1995), International Launch Services (1995), Blue Origin (2000), SpaceX (2002), Virgin Galactic (2004 with Virgin Orbit spinning off in 2017), RocketLab (2006), Stratolaunch Systems (2011), and others were founded to start competing in the rocket industry. Fast forward to today and the surviving rocket companies have matured into reliable launch providers. With that experience, they bring more launch options and technology that significantly drives down the cost of launching satellites into space. However, that doesn’t mean that the internet from space industry is still not volatile. OneWeb, which was founded in 2016 and has a constellation of 74 satellites, filed for bankruptcy in 2020. However, like its other satellite internet kin before it, was able to secure additional funding and quickly exit bankruptcy.

Until recently, satellite internet was expensive and impractical. Many satellites were located in geostationary orbit (in lockstep with the earth’s rotation so that they are always overhead). Unlike low-earth orbits (LEO), which are closer to the planet’s atmosphere (160km – 1000km from Earth’s surface), geostationary orbits are much further out (typically 36,000 km). This additional distance deceases performance in latency time (the time that it takes data to make a round trip), and bandwidth (how much data can be sent at a time). Some satellite networks were only available in certain regions of the planet and do not provide full coverage. Additionally, the cost was prohibitive. Residential satellite internet has a high price per GB and would only offer unlimited use during non-peak hours.

The Economics of Satellite Internet Today

Satellite Internet is not a direct competitor with the likes of landline and cellular internet just yet, but the numbers are getting closer. This is especially beneficial for those who live in rural areas where the landline cables, if any, are inadequate and/or their cellular network is not strong enough to provide broadband internet. To better illustrate the coming growth of Satellite based internet, I compared my current landline to cellular and satellite internet packages.

Landline – I live in a decently well-connected area which supposedly offers up to 50Mbps (megabits per second) download and about 20Mbps upload connectivity (where is that 1Gbps fiber at, AT&T?!) I pay $60/month for unlimited service, although I believe my ISP (Internet Service Provider) may throttle down my speed after I use 1TB of data. For argument’s sake, let’s say I’m capped at 1TB (1000GB) therefore making my price $0.06/GB (gigabytes).

Mobile Hotspot – The same ISP offers 100GB/month of mobile hotspot for $100, making the cost $1/GB. Download and upload speeds are dependent on what network is available (3G, 4G, 5G…) and signal quality.

HughesNet Satellite Internet – Offers “fast” internet at 25Mbps download and 3Mbps upload speeds for up to 50GB for $150/month which equates to $3/GB. It should also be noted that if you exceed your 50GB allowance you are still connected but throttled down to 1 – 3Mbps download speed and customers have an additional 50GB a month of “fast” internet during non-peak hours (2:00am – 8:00am). Pricing does not include buying or leasing a terminal ($350 – $450).

If Satellite internet history has taught us anything, the economics need to work for it to be a success. That is why the new generation of Satellite internet is so exciting. Companies like SpaceX with their Starlink constellation and Blue Origin with their future constellation are looking to deploy thousands of satellites in Low-Earth Orbit to provide near total coverage of the earth with performance of 50Mbps to 150Mbps with a latency from 20ms to 40ms.

SpaceX’s Starlink is currently in beta testing with just a fraction of the needed satellites currently in orbit. SpaceX is a pioneer in reusable rocketry which in turn has reduced their operating costs of deploying their Starlink Satellites. This savings is passed on to the end user as Starlink is currently priced at $99/month for unlimited use. Comparing this to the ISPs we explored earlier (and using 1TB of data as our apples-to-apples comparison), Starlink offers $0.10/GB. This beats existing satellite internet’s price by 3000% and mobile networks by 1000%.

While other factors like weather and the price of a Starlink terminal ($499) are still variables to consider, the price difference is so competitive that Satellite internet is likely become more mainstream. This should also pressure mobile network pricing downward especially if future smartphones are able to include an antenna for satellite communication.

With each leap in communication technology human beings have enjoyed a figurative shrinking of the world. From the railroad to the internet, we have all become more connected. With this increased connection comes information, and with this information comes knowledge. And if G.I. Joe taught us anything it is that “Knowledge is Power.”

To better maintain their power, some governing bodies have put measures in place to censor and/or restrict access to information. Examples such as the Great Firewall of China, the Great Firewall of India, and Russia’s Roskomnadzor Blacklist all limit what users within their networks can see and do. Open satellite-based internet can physically avoid these restrictions allowing people within these areas to receive unrestricted information.

Therefore, countries who restrict media, the internet, and other communications to their citizens are quickly outlawing non-domestic Satellite internet. One such example is Russia’s proposed penalties for individuals and businesses using non-Russian Satellite internet. Russia is planning on building their own satellite internet constellation named “Sphere” by 2030. The proposed legislation would fine citizens and officials the equivalent of $133 to $398 US dollars and businesses $6,633 to $13,266 US dollars for using Starlink or similar services. The next big black market in such counties may just be satellite internet terminals. While this may make the world a smaller place, it could cause some unrest in more restricted countries.

While the market for internet access through space was slow to catch on, new technology that reduces the cost of launching and maintaining these satellite constellations is driving down the cost and increasing demand. With easier to access and more affordable internet from space, the world is taking its next step to becoming more connected.

So the next time you are gazing up at the stars on a warm summer night, just know that infinite amounts of cat videos, Tweets, memes and other ridiculousness found on the internet are orbiting all around you.